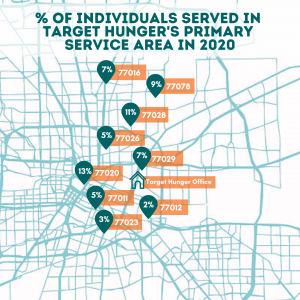 Over the next 9 months, we will be introducing you to each of the 9 zip codes that Target Hunger serves. Each month we will share the history of the neighborhood and later that month share the stories of the partners and Target Hunger families that reside there. This will be an opportunity to highlight these communities outside of the issue of hunger. These neighborhoods have deep histories and we are excited to share their stories with you.

This month we’re focusing on the 77020 zip code, home to the Target Hunger warehouse on Shotwell and two of our community partners – Fifth Ward Multi-Service Center and Denver Harbor Multi-Service Center. This is one of the first areas Target Hunger served when it was founded in 1989. Nestled within this zip code boundary are two major neighborhoods – Greater Fifth Ward and Denver Harbor.

The city of Houston was founded in 1836 and incorporated in 1837. The city founders made the decision to divide the city into four different wards based on geographical boundaries. These were meant to serve the city in a similar way as the council districts do today. At its creation, Fifth Ward was made up of many ethnic groups, largely represented by Irish and Jewish immigrants. Adjacent to Fifth Ward, Denver Harbor was settled by Greeks, Italians, and Poles. After the Civil War, newly freed slaves began establishing their lives in this area. The significant growth led to the creation of the Fifth Ward in the city’s ward system. By the late 1800s, Fifth Ward’s population was nearly equally split with 561 White and 578 Black residents, with people making a living in the eastside ship channel, industrial areas, and as domestic workers.

This hardworking population grew the Fifth Ward neighborhood to be a thriving community in the early to mid 1900s, as the population shifted to become predominantly Black. Denver Harbor remained as a sparsely populated area on the outskirts of the city. There were many small businesses, including barbershops, a pharmacy, and a dentist’s office, that opened on Lyons Avenue. By 1925, there were 40 Black-owned businesses in the area. They also survived the largest fire in Houston’s history – the “Greater Fifth Ward Fire,” in 1912. The fire destroyed 13 industrial plants, a school, 8 stores, a church, and 119 homes, totaling over $3 million in property damage.

In the 1960’s, after desegregation, the population began to shift. Many in the middle-class began moving to the suburbs looking for bigger opportunities. The neighborhood lost a significant part of its population – businesses were vacant, and houses were boarded up. In the 1970s and 1980s, it became known as one of Houston’s poorest neighborhoods. Ernest McMillan, a community activist, argued that this was due largely in part to the lack of resources in the community.

Since the 1990s, Fifth Ward and Denver Harbor’s Hispanic populations has increased significantly, making up almost 50% of the population. The community has remained a largely low-income area after the population shift in the 1960s, with nearly 30% of families living below the poverty line. About 8% is unemployed, and only about a third of the population has gone to college or beyond. The area is now considered a food desert – an area with limited access to affordable, nutritious food. Despite these obstacles, the area has seen growth thanks to the Fifth Ward Community Redevelopment Corporation and the engagement of community members.

A History of Civic Engagement and Culture

In the 1920s, Fifth Ward was home to the community of “Frenchtown,” an area

settled by a group of Louisiana Creoles. It is also home to some of the community’s oldest churches – Mount Vernon United Methodist was founded in 1865. As of 2011, there were six churches over 100 years old.

The neighborhood has a history of civic activism and engagement. Community members threatened secession from the city of Houston twice in the late 1800s because of complaints about insufficient municipal services. Both led the city to make changes in favor of the neighborhood. In the mid-1900s, a local businessman established the Fifth Ward Civic Club, and residents set up the Julia C. Hester House, a long-standing community center providing support and tools to improve the lives of residents. 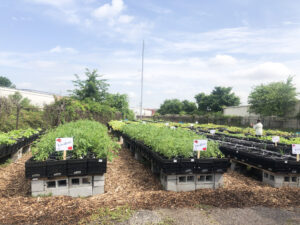 Our second garden located on Shotwell St. in Denver Harbor.

Target Hunger also stemmed from the community’s civic leaders. At its founding, Target Hunger was a grassroots, community-based program started to fight the increasing hunger problem in the neighborhood. Led by late Congressman Mickey Leland and Houston businessman Pete Van Horn, the Select Committee on Hunger was formed in partnership with the United Way.

The neighborhood’s rich history and community connection make it an integral part of the city of Houston. Though today it is not at its peak, its community remains strong and ready to rebuild. We are grateful to be a small part of the history of this community and look forward to seeing it return to the thriving community it once was.